Most Americans enjoy a daily dose of coffee, and an increasing body of research indicates it’s not a bad habit to have. Meanwhile, a growing number of people are adapting their morning drink rituals to incorporate ingredients ranging from matcha to mushrooms in search of additional health benefits.

“After many years of research, we have concluded that coffee can be a fantastic additive to the diet. Coffee consumption is associated with a decrease in all-cause mortality, risk of cardiovascular death and stroke,” says Claudia Hleap, a registered dietician nutritionist in Philadelphia.

Regular coffee consumption is also correlated with a decreased risk of Type 2 diabetes, potentially due to its naturally containing polyphenols, which are plant compounds with protective antioxidant properties. The caffeine in coffee, as well as in tea and cocoa, can also boost short-term metabolism and brain function.

As with most things in life, moderation is key; overconsumption of coffee can result in insomnia, irritability, gastrointestinal issues and other short-lived side effects. “Caffeine intake may negatively impact sleep duration and quality, which is essential for optimal health,” says Hleap. “Coffee can also serve as a vessel for added sugars and unhealthy fats in the diet if you are adding sweeteners and artificial creamers.”

Many java drinkers today are experimenting with healthy alternatives and add-ons to shake up their routine morning pick-me-up. Chicory-based drinks, made from roasted ground chicory root, are a favorite for Lauren O’Connor, a Los Angeles registered dietitian nutritionist and author of Healthy Cooking for One. “Chicory is caffeine-free, acid-free and a gut-friendly alternative to coffee,” she says. “It also has a robust, roasted taste that can satisfy those who desire more than an herbal tea. Date 'coffee’, made from date seed, also has a deep, rich flavor.”

Some chicory tea blends also incorporate roasted dandelion root, which has been used by herbalists for centuries to enhance the body’s detoxifying functions, particularly of the liver. Golden milk, a traditional Indian beverage associated with Ayurvedic medicine, is another flavorful alternative with numerous health benefits. Recipes vary, but golden milk is typically prepared by heating milk or a plant-based milk alternative along with turmeric, black pepper, ginger, cinnamon, honey, vanilla and/or cardamom. “These warming spices go above a simple caffeine replacement to provide powerful anti-inflammatory benefits,” says Trista Best, a registered dietitian in Dalton, Georgia.

Best also recommends matcha, a traditional Japanese drink made from powdered, young, green tea leaves whisked in water as a coffee alternative with less caffeine and other added benefits. Because the tea leaves are essentially consumed in powder form rather than just steeped in water, matcha contains more catechins, an important antioxidant, than a typical preparation of green tea. “The L-theanine, an amino acid, in matcha is known to improve brain health, which shows itself through improved memory, attention and reaction time,” notes Best.

A Better Bean
Rather than swap out coffee altogether, some java lovers are bettering their beloved beans with healthy add-ons such as powdered mushrooms, ghee and spices. “A healthy addition to coffee can include coconut oil, collagen or butter. These can add some fat and protein content, which will provide more energy while also jumpstarting your metabolism at the beginning of the day,” says holistic health coach Virginia Gruhler. Ghee, a clarified butter that originated in ancient India, has been touted as a “keto-friendly” way to help neutralize the acidity of coffee while adding healthy fats and nutrients.

Spices like cinnamon and cardamom have been added to coffee and black tea for centuries in the Middle East and Asia to enhance both flavor and health. Cinnamon, for example, may help lower blood sugar, in addition to having antioxidant, anti-inflammatory and antimicrobial properties.
Mushroom coffee is another popular “coffee-plus” beverage which combines the flavor and energy boost of java with the benefits of medicinal fungi like turkey tail, lion’s mane and chaga, boosting the immune system and potentially warding off serious health conditions like dementia and cancer.

Because caffeine can stay in the bloodstream for up to 10 hours, staying clear of all caffeinated drinks in the later hours of the day will help ensure a better night’s sleep. When a mid-afternoon slump hits, a brisk walk followed by a cup of a flavorful herbal tea like Rooibos or lemongrass can wake up the body and the brain naturally. 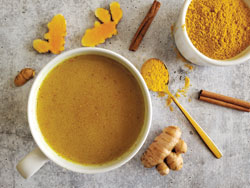 Gently heat milk of choice in a pot on the stovetop over medium heat. Once it’s warm, add the suggested spices, oil and sweetener.
Use a whisk to thoroughly combine all of the ingredients. Depending on the type of milk used, vigorous whisking may create a nice, latte-like “foam”. Continue to heat for about five minutes, whisking occasionally. Serve immediately and enjoy it warm.

Golden milk is also delicious cold over ice, although oil is not recommended to use in this case. Store any leftovers in an airtight container in the refrigerator for up to three days. Reheat leftovers on the stovetop (rather than in a microwave) to preserve maximum nutritional value.

Read 229 times
Tagged under
back to top