As a former bartender, Katie Cheney enjoys mixing drinks for friends, and one night recently, in her San Francisco apartment, she tried out something new: an alcohol-free “Noquila Sunrise” made with a distilled, plant-based spirit. “I was actually pleasantly surprised. Even though we were drinking non-alcoholic drinks, we still had just as much fun as usual!” recalls Cheney, who blogs at DrinksSaloon.com.

In New York City, Marcos Martinez has begun drinking virgin piña coladas when out on the town with friends. “The feeling is surprisingly great since I don’t wake up with hangovers. More importantly, I’ve realized that I don’t have to use alcohol as a crutch for my social anxiety,” says Martinez, who owns the black gay lifestyle blog TheMenWhoBrunch.com.

At Chicago’s Kumiko Japanese cocktail bar, owner Julia Momosé offers a menu of what she calls “Spiritfrees,” crafted without alcohol and with ingredients like yarrow, ume—a Japanese fruit—and cardamom. “Folks comment on how they appreciate that it is 'more than just juice,’ or how surprised they are at their depth, texture and complexity,” she says.

The “sober-curious”—people experimenting with alcohol-free beverages as a way of prioritizing their health and fitness over a short-lived buzz—are changing America’s drinking culture. For the first time in 20 years, fewer Americans are regularly drinking, reports Gallup, and tipplers are drinking measurably less than they did 10 years ago.

No longer stuck with a seltzer while dodging questions from inquisitive imbibers, today the sober-inclined can sip from a vast array of sophisticated choices—from faux vodka in exotic, crafted drinks to prize-winning sparkling wines to low- and no-alcohol craft beer. No-booze options can be easily ordered at restaurants, picked up at supermarkets or delivered at home with a few online clicks.

“The best part about having a fun, non-alcoholic beverage in hand is that you get the taste and experience of a cocktail or beer, just without the alcohol and potential negative side effects,” says dietitian Kerry Benson, co-author of Mocktail Party: 75 Plant-Based, Non-Alcoholic Mocktail Recipes for Every Occasion. “You have your wits about you, you can drive if necessary, you are less likely to say or do something you might regret and you won’t have a hangover the next morning. And alcohol-free drinks are usually less expensive than their alcoholic counterparts.”

Sober-curious strategies range widely. Some people start tentatively, but increasingly turn to non-alcoholic drinks because they prefer the taste, price and lower calorie count, as well as the diminished risk of heart and liver disease. Others may go cold turkey for a month or two to break a pandemic-induced habit, alternate alcoholic and non-alcoholic drinks at a game or bar to avoid getting tipsy, or drink a Bloody Mary for a weekend brunch and virgin versions during the week to enhance work productivity.

The sales of non-alcoholic beverages shot up 33 percent to $331 million in 2021, reports Nielsen, and online sales of non- and low-alcoholic beverages skyrocketed 315 percent. To compete for the Millennials-heavy market, distillers like Seedlip, Suntory and Lyre’s have created beverages evoking tequila, Campari and vodka; breweries like Guinness, Budweiser and Carlsberg and small crafters are offering robust-tasting near- and no-alcohol beers; and wineries are using distillation and reverse osmosis to produce fine, low-alcohol Cabernets, Chardonnays and other varieties. Niche products are growing: for example, Los Angeles-based Optimist Botanicals bills its gin-, vodka- and tequila-like botanical blends as being vegan, gluten-free and paleo- and keto-friendly.

On the home front, people are making their own concoctions, often with natural and herbal ingredients, such as pears, tomatoes, cilantro and spices. “Garden-grown produce, windowsill herbs and farmers market finds are the ideal foundation for recipes, from tea sangrias to shaken mocktails,” says New Jersey cooking instructor and recipe developer Vanessa Young, creator of ThirstyRadish.com. As an example, she says, “A slice of brûléed fruit gives a non-alcoholic drink a touch of smoky sweetness, plus it is so appealing in the glass.”

Substance abuse counselors caution that beverages that mimic alcohol may not be a good route for recovery from serious alcohol abuse because they can reawaken destructive patterns. And consumers are advised to look carefully at labels. “Alcohol-free” beer contains 0.0 percent alcohol. “Non-alcoholic” beer can contain up to 0.5 percent alcohol, but some have been found to contain up to 2 percent—not desirable if pregnant or in recovery.
Still, says Karolina Rzadkowolska, author of Euphoric: Ditch Alcohol and Gain a Happier, More Confident You, “The popularity of alcohol-free drinks is changing a culture. We are going from a culture that glamorizes drinking at every social situation, with little valid excuse to decline, to a culture that gives people healthier options.”

Health writer Ronica O’Hara can be contacted at This email address is being protected from spambots. You need JavaScript enabled to view it..

To salt the rims of four to six lowball or margarita glasses, pour a thin layer of salt onto a plate or a shallow bowl.

Slide a lime wedge around the rim of the glass to wet it, or use a finger to apply the juice to the rim, then dip and twist the glass in the salt. Combine all of the drink ingredients in a pitcher. Stir.

Fill the rimmed glasses with ice. Divide the margarita mix among the glasses. Garnish with lime wheels.

From Mocktail Party: 75 Plant-Based, Non-Alcoholic Mocktail Recipes for Every Occasion, by Kerry Benson and Diana Licalzi.

photo (above) courtesy of Kerry Benson and Diana Licalzi 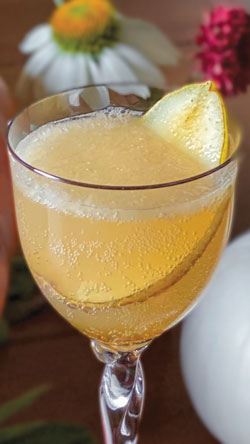 For the syrup, whisk to combine ½ cup maple syrup with ¼ cup filtered water in a small saucepan, and heat until small bubbles begin to form around the edge. Remove from the heat and allow to cool.

For each drink, gently mash the pomegranate arils with lemon juice in a muddler, then add the mixture into a cocktail shaker, along with the syrup, pear juice and ice. Shake to chill, and strain into a glass to serve. Top with sparkling mineral water. Add a slice of ripe Bartlett or brûléed pear.

Recipe and photo courtesy of Vanessa Young of ThirstyRadish.com.
{/slider)

Read 303 times
Tagged under
back to top