Eating for the Planet
Diet for sustainability
by Sheila Julson

What we choose to put on our plates influences not only our physical health, but also the health of the environment. While much of the climate conversation focuses on the burning of fossil fuels, commercial food production—particularly livestock—uses large amounts of land, water and energy. Wasted food contributes to approximately 10 percent of all greenhouse gas emissions.

“The environmental impacts begin with the soil,” Prezkop explains. “Soil that’s depleted of nutrients loses its ability to capture carbon and produce nutrient-rich foods. The long chain continues with the processing and packaging of that food, and then transporting it to grocery store shelves and, eventually, to the consumer’s home.”

Eat Less Meat
Animal agriculture is the leading cause of climate change, argues author, screenwriter and playwright Glen Merzer in his latest book, Food Is Climate: A Response to Al Gore, Bill Gates, Paul Hawken & the Conventional Narrative on Climate Change. “When we have 93 million cattle farmed in the U.S. and 31 billion animals farmed globally each year, they create mountains of waste,” says Merzer, a dedicated vegan of 30 years. “That waste infiltrates water supplies and causes contamination, such as E. coli outbreaks, in foods like lettuce and tomatoes that are grown downstream.”

He adds that cows belch methane, a far more powerful greenhouse gas than carbon dioxide, and that grass-fed cows belch even more of it than grain-fed, feedlot cows. In addition, nitrogen fertilizers used to grow animal feed run into waterways. Overfishing and ocean warming threaten populations of phytoplankton, which sequester carbon dioxide and seed clouds. Deforestation to create grazing land may be the single greatest future threat to our climate because forests also sequester carbon and provide a home for diverse flora and fauna.

Make Simple Swaps
Prezkop emphasizes that despite these problems with the industrial food chain, changing the way we produce food is also the solution. The WWF works with suppliers to educate and promote regenerative production practices. On the consumer side, changing the way food is produced can be achieved by changing people’s dietary demands.

“We don’t prescribe people to eat a certain way. We do believe different people and cultures have different dietary needs,” she says. “The global north eats a lot of meat, so we do recommend a plant-forward diet while still incorporating animal proteins, depending on individual dietary needs.”

Merzer argues that we have little control over fossil fuel burning, but we can control our diets. He promotes plant-based eating as a primary solution to climate change. Changing mindsets about “normal” traditions, such as having hamburgers on the Fourth of July or turkey on Thanksgiving, can be difficult, but achievable with the planet at stake, he says.

Sophie Egan, founder of FullTableSolutions.com and author of How to Be a Conscious Eater: Making Food Choices That Are Good For You, Others, and the Planet, advises to start small by looking at the foods eaten most frequently and identifying ways to make simple swaps. “If you have toast with butter every morning, that could be changed to a nut butter. A sandwich with cold cuts every day for lunch, that can be replaced with a roasted vegetables and hummus sandwich or an avocado sandwich. You can still eat something in a familiar form, but replace ingredients with lower-emissions options,” she says.

If someone is intimidated by switching to an all plant-based diet, a flexitarian option emphasizing foods from the plant kingdom while enjoying meat only occasionally may be more sustainable throughout a person’s lifetime. Her book contains a “protein scorecard” from the World Resources Institute that lists animal and plant sources in terms of greenhouse gas emissions per gram of protein from the worst offenders to the least, with beef (along with goat and lamb) being at the top.

“When food is wasted, we’re not just throwing away food, but everything it took to produce that food is also wasted—the water, the fertilizer and the land.”
–Leigh Prezkop

Prezkop recommends eating a wide variety of foods. “Currently, 75 percent of food produced is from 12 plant species and five animal species, despite that there are thousands of varieties. This means there’s less diversity happening in the field. Diversity helps with regeneration and healthy soils. Producing the same crops over and over means there’s no crop rotation and no diversity happening, leading to degraded soils and deforestation to produce more of the same crop.”

Egan adds that diets that are over-reliant on just a few food sources like corn, wheat, rice and soy threaten the Earth and can lead to food insecurity. “Think of it as risk management with a financial portfolio: We have a diversified portfolio of foods available to feed a growing population, but as the climate warms, extreme weather events threaten yields because lack of fresh water and unhealthy soil threaten the planet and, ultimately, food production.”

Eating food that is as close as to its original state as possible is better for the planet. “The more food is processed, the more resources it took to get it to market,” Prezkop notes.

Cut Food Waste
Prezkop says approximately 40 percent of the food produced globally is lost while still on the farm or further up the supply chain. “When food is wasted, we’re not just throwing away food, but everything it took to produce that food is also wasted—the water, the fertilizer and the land.”

A recent WWF report entitled Driven To Waste cites new data indicating that food waste contributes to approximately 10 percent of all greenhouse gas emissions—nearly twice the emissions produced annually by all the cars in the U.S. and Europe.

Egan suggests using a shopping list; impulse buys can be forgotten and are prone to spoiling. Keeping food visible by putting fruits and vegetables front and center ensures they won’t be forgotten. Leftovers can be kept from languishing by designating a section of the refrigerator for food to eat first or a day of the week to eat leftovers for dinner. “You can freeze just about anything,” Egan says, from leftover bread to cheese, which can be shredded before frozen. Even scrambled eggs can be poured into a freezer container to use later. (For more ideas, check out SaveTheFood.com and Dana Gunders’ Waste-Free Kitchen Handbook.)

Similarly missioned organizations exist nationwide. FoodRescue.us, with 40 locations in 20 states, provides assistance and even a dropoff/pickup app for people starting local groups. Since its founding in 2011, it has provided 85 million meals and kept 109 million pounds of excess food out of landfills. Its website offers a potent plea: “Fight Hunger. Help the Planet. Be the Rescue.”

Sheila Julson is a Milwaukee-based freelance writer and contributor to Natural Awakenings magazine. 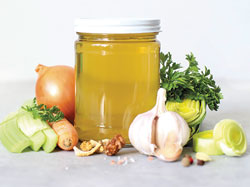 Those potatoes that start to sprout, the straggler stalks of celery wilting in the back of the crisper drawer or that pompon of green carrot tops can all be used to make vegetable stock. This is a very general recipe with plenty of creative license to get more mileage from leftover vegetables that normally would have been discarded.

Start by collecting vegetable scraps that typically aren’t used—thick asparagus ends, carrot tops and broccoli stems. Even wilted kale or limp carrots that are no longer good to eat fresh, but are still free from mold or mush, can be added. Coarsely chop scrap veggies and put them into a freezer bag. Store them in the freezer until four to five pounds of vegetable scrap have been accumulated.

4 to 5 lb vegetable scraps (can include the freezer bag of vegetable scraps, green tops from a fresh bunch of carrots, slightly wilted kale, turnips that are starting to turn soft or any combination)
2 bay leaves
6 garlic cloves, peeled and smashed
2 medium onions, cut into quarters
6 quarts water
Salt to taste

Coarsely chop all vegetables and add to a large stockpot. (If the vegetables are still frozen, dump them into the stockpot; they’ll begin to thaw during the cooking process.) Add the water and bring to a boil. Reduce heat and simmer, stirring frequently.

Cook for about two hours or until the liquid is reduced by about half and the color begins to fade from the vegetables.

Let the mixture cool. Strain the stock into a large bowl.

Compost the vegetables, as they are now flavorless; all of the flavors have been cooked into the broth.

Strain broth a second time through a cheesecloth or sieve for an even clearer broth. Salt to taste and portion into Mason jars.

Store in the refrigerator for one to two weeks, or freeze if saving for later use. 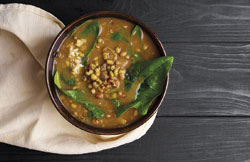 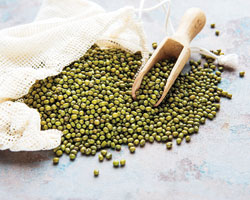 lmaje/AdobeStock.comRinse the mung beans, then soak overnight in water. The next day, discard the water, rinse the beans again and add 3 cups of water and bay leaves. Bring the beans to near boil and reduce heat to simmer.

Scoop away the white foam that forms on the surface of the water and discard. Simmer covered for about 40 minutes.

Add the onions, garlic, ginger, turmeric and curry, and continue simmering for an additional 20 minutes. Stir in chopped cilantro or basil, lemon juice
and black pepper.

Serve over rice or another grain.

Recipe courtesy of Joanna Samorow-Merzer, reprinted with permission from Own Your Health, by Glen Merzer.

Read 321 times
Tagged under
back to top