In 2009, an Environmental Working Group (EWG) study found that bone meal and animal byproducts in eight of 10 major national dog food brands contain fluoride in amounts between 1.6 and 2.5 times higher than the U.S. Environmental Protection Agency (EPA) recommended maximum dose in drinking water. Some fluoride from tap water used in the manufacturing of pet food contributes to this.

Olga Naidenko, Ph.D., lead researcher of the study, remarks, “A failed regulatory system and suspect practices by some in the pet food industry puts countless dogs at risk of ingesting
excessive fluoride.”

Fluoride occurs naturally in rocks, soil and thus some food plants and water supplies. More enters food via use of fluoride-based pesticides and commercial processing facilities. The EWG advises that two-thirds of all Americans, along with pets and farm animals, are exposed to artificially fluoridated tap water. 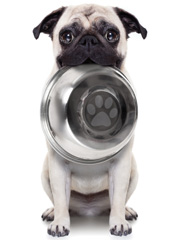 Dogs are at substantial long-term risk for exposure to unacceptably high levels of fluoride. They are, for example, at significantly higher probability for bone cancer than humans, with more than 8,000 cases diagnosed each year in the U.S., compared with about 900 human cases.

According to the EWG, a dog drinking normal amounts of tap water would be exposed to 0.05 to 0.1 milligram (mg) of fluoride per kilogram (kg) of body weight daily. A 10-pound puppy that daily eats about a cup of dog food would ingest approximately 0.25 mg fluoride per kg body weight a day, based on average fluoride content in the eight contaminated brands it tested. Altogether, the puppy could be exposed to 3.5 times more fluoride than the EPA allows in drinking water. Large breed puppies may be exposed to even more fluoride due to higher water intake.

Whatever the size and the appetite of a dog, combined fluoride exposure from food and water can easily become unsafe. Eating the same food every day, they may be constantly consuming more fluoride than is healthy for normal growth, leading to health problems and higher veterinary bills later in life.

Prevent High Ingestion of Fluoride
The EWG recommends owners purchase pet foods free of bone meal and other meals made from animal byproducts. It also suggests that government set fluoride limits in pet food that protect both puppies and large breeds most at risk for bone cancer.

In preparing homemade food for a pet, make sure any added bone meal is free of fluoride and lead. Ethical bone meal producers will test for these contaminants; verify with the source.

Fox suggests a good bone meal substitute might be fossilized oyster shell, dolomite or a synthesized or refined calcium supplement like calcium citrate, ascorbate, stearate or gluconate. Or, consider a pure tricalcium and dicalcium phosphate, blended with magnesium.

Fox attests that bones from longer-lived food animals such as dairy cows, laying hens and breeding stock likely contain higher levels of fluoride than shorter-lived animals like chickens, calves and lambs. In his article “Fluoride in Pet Food: A Serious Health Risk for Both Dogs and Cats?” he writes: “Fluorides accumulate in farmed animals over time from phosphate fertilizers, phosphate supplements, bone meal and fish meal supplements and pesticide and industrial-pollution-contaminated pastures and animal feed. The bones, fins, gills and scales of fish are often high in fluoride.” He recommends raw food diets that avoid ground bone from older animals like beef cattle and adult sheep.

Read 1882 times
Tagged under
back to top