Anyone walking into a U.S. hospital today will notice something that was inconceivable 50 years ago—one in three practicing physicians is a woman, and among physicians under age 35, it’s three in five. That compares to one in 14 in 1970. For women needing health care, that fact can change everything. “Research says that female physicians provide better care to female patients than male physicians do,” says Harvard Medical School Associate Professor Alice Domar, Ph.D., a pioneer in women’s mind-body medicine. “They are more likely to listen carefully and take complaints seriously.”

That’s just one factor in how health care is improving for women. Only three decades ago, women were simply considered “small men” in medical research and rarely included as subjects in clinical studies. Today, after a 1993 federal mandate ensured their inclusion, it’s been well established that women metabolize drugs differently than men, respond to health threats with a more robust immune system and are more likely to experience side effects. These findings have helped spur major changes for women in standards, dosages, medications and procedures—resulting in fewer cancer deaths, better treatment of autoimmune disorders and more nuanced cardiac care strategies. Although much has improved about women’s health, much more remains to be done.

photo: anna shvets/Pexels.comCancer
About one in three women is diagnosed with cancer in the course of a lifetime, and they have better survival rates than men, of which one in two receives that diagnosis. Between 2001 and 2017, the overall cancer death rate for women declined by 1.4 percent each year as diagnoses and treatments became more refined and targeted. The number one cancer killer for women is lung cancer, although 19 percent diagnosed have never smoked. The next most deadly are cancers of the breast, colon/rectum, pancreas and ovaries.

Breast cancer deaths have dropped by 40 percent since 1989, thanks to greater awareness, early detection and better treatments. “Women learned from the AIDS crisis that making noise gets results,” says Domar. “Look at how far breast cancer research and treatment has come in the past 10 to 20 years, how powerful Breast Cancer Awareness Month is, and that everyone recognizes that pink ribbon.”

Common symptoms: Bowel changes, lingering sores, fatigue, lumps, unusual discharge, difficulty digesting or swallowing, nagging cough or hoarseness, belly or back pain.
New research: An international research team has identified a direct molecular link between meat and dairy diets and the development of antibodies in the blood that increases the chances of developing cancer.

Medical advances: Painful, invasive biopsies may become a thing of the past. Mayo Clinic researchers have developed a simple blood test that detects more than 50 types of cancer, as well as their location within the body, with a high degree of accuracy, and the City of Hope Cancer Center, in Los Angeles, has developed a urine test that analyzes cell-free fragments of DNA to detect cancer.

Preventive strategies: Vitamin D supplementation lowers the risk of mortality across all cancers, German researchers found, estimating that if all Germans older than 50 took such supplements, up to 30,000 cancer deaths per year might be avoided. A 10-year study found that people between 55 and 74 that took a low-dose aspirin at least three times each week lowered their risk of all types of cancer by 15 percent and overall mortality by 19 percent.

Heart Disease
One in three American women die from heart disease, more than all cancers combined. “Unfortunately, awareness that heart disease can and does happen to women remains low, and this results in delay of care,” says cardiologist Nicole Harkin of Whole Heart Cardiology, in San Francisco. “Women tend to seek medical care later in the course of their heart attack and with more risk factors, resulting in poorer outcomes, and they are more likely than men to die of their first heart attack.”

Women have different symptoms of heart disease than men, are often misdiagnosed and have a 20 percent greater risk of dying within five years of a heart attack. Pregnant women that develop hypertension are two to five times more likely to later develop cardiovascular disease.

Common symptoms: Heart pressure, fatigue, breathlessness and pain between the shoulder blades.
New research: Eating more than seven servings per day of refined grains like croissants and white bread increased the risk of heart disease by 33 percent and stroke by 47 percent, concluded a study in The British Medical Journal. In a Stanford study, participants that ate plant-based meat for eight weeks had improved markers of heart health, lower LDL levels and lost two pounds compared to those eating meat.

Medical advances: To successfully fix a floppy mitral valve that’s hampering blood flow in the heart, doctors can guide a catheter up a patient’s leg vein and staple the troubled parts of the valve with a tiny clip, a safer and less invasive procedure than open-heart surgery.

Preventive strategies: Eating nuts several times a week lowers by 30 to 50 percent the risk of heart attacks, sudden cardiac death and cardiovascular disease, four large cohort studies have shown. Older women with high fitness levels have one quarter the risk of dying from heart disease as women that are out of shape, report Spanish researchers.

Autoimmune Diseases
The prevalence of autoimmune diseases has grown by one half in two decades, even as medications and targeted therapies have kept more patients active and out of wheelchairs. “Where it used to be the norm for many physicians to consider women with some autoimmune illnesses to be neurotic, that approach is now being recognized as being abusive and unacceptable. This is a critical step towards recovery,” says chronic fatigue expert Jacob Teitelbaum, M.D., author of From Fatigued to Fantastic!

About 80 percent of the 23 million Americans that suffer from debilitating autoimmune diseases are women, and those conditions tend to develop during childbearing years. The eighth-leading cause of death among women, these illnesses shorten lifespan by an average of eight years. The 80-plus diseases, including fibromyalgia, lupus, celiac disease, Type 1 diabetes, psoriasis and rheumatoid arthritis, are linked to genetics, environmental triggers, some medications, obesity, injuries and stress.

New research: Eating significantly fewer foods containing the amino acid methionine, found at high levels in meat, fish, dairy and eggs, could slow the onset and progression of autoimmune disorders such as multiple sclerosis in high-risk individuals, reports a study in Cell Metabolism.

Medical advances: Evidence is mounting that low doses of naltrexone, a substance-abuse treatment drug, can treat conditions like lupus, Crohn’s disease and rheumatoid arthritis by normalizing the immune system and relieving pain with few side effects. “It costs only about 70 cents a day, is made by compounding pharmacists and is remarkably beneficial for a host of autoimmune conditions,” says Teitelbaum. 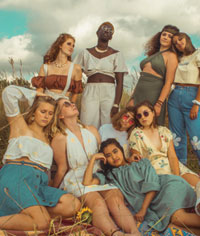 photo: allyson weislogel/Unsplash.comHormonal Imbalances
The past 20 years has seen significant improvements in the studies and treatments of female hormonal issues. “There are now treatment options that allow women to transition into menopause, options for prevention of osteoporosis and momentous changes in fertility,” says Stephanie Seitz, a naturopathic family physician in Scottsdale, Arizona. At the same time, she adds, “I have seen environmental toxins rising in my female population. I see young girls coming in with polycystic ovary syndrome, early menarche and painful menstrual cramping; women having trouble getting pregnant for unknown reasons; the rise of fibroids, premature ovarian insufficiency and endometriosis.”

Hormones are the body’s chemical messengers, regulating processes ranging from hunger to blood pressure to mood and playing a key role in reproduction. They have come under assault from endocrine disrupters, thousands of largely unregulated per- and polyfluoroalkyl substances, abbreviated PFAS. These “forever chemicals” are found in everything from plastics to cushions to canned foods, and are in the blood of 98 percent of Americans. Studies have linked them to girls experiencing puberty one year earlier than 40 years ago; to rising cases of infertility, miscarriages and low birth weight; to menopause occurring two to four years earlier; and to obesity, polycystic ovarian syndrome, endometriosis and breast cancer.

Common symptoms: Because hormones regulate all of the body’s processes, symptoms of imbalance run the gamut and may include fatigue, weakness, erratic menstrual cycles and weight gain or loss.

Medical advances: A major study of 9,000 postmenopausal women with hormone-sensitive breast cancer showed 94 percent that received hormonal therapy, but not chemotherapy, did not have recurrences.

Preventive strategies: To avoid toxic chemicals, buy organics; replace plastic kitchen containers with glass; replace Teflon pans with ceramic or cast-iron; use chemical-free cosmetics and shampoos; nix air fresheners and chemical cleaners; and check out food and care products at the Environmental Working Group (ewg.org). To help detox the body, consider working with a naturopathic doctor to develop a program that may include cleansing foods, herbs, saunas, elimination diets and chelators such as activated charcoal and algae.

Depression
Women are twice as likely as men to develop depression, with one in four having a major episode at some point in life, yet fewer than half seek treatment. “Many women are too busy caring for others and feel guilty about their depression, fearing it could get in the way of their caregiving goals,” says New York psychoanalyst Claudia Luiz. “Many have the fantasy that if they open that door and allow themselves to focus on their feelings, they won’t be able to keep going.”

Depression occurs most frequently in women ages 25 to 44, and one in five teenage girls reports having had a major depressive episode, a number that has exploded due to social media use. Psychotherapy is effective for 62 percent of adults with depression, antidepressants work for 54 percent and combining the two is helpful for 72 percent.

Medical advances: For the estimated one in four people with depression that doesn’t respond to medication or therapy, emerging approaches offer fresh hope. Low doses of the anesthetic drug ketamine lifted the depression of 70 percent of hard-to-treat subjects by targeting specific serotonin receptors, Swedish researchers report. Transcranial magnetic stimulation, which uses magnetic pulses to stimulate parts of the prefrontal cortex, lifts symptoms for 50 to 60 percent of subjects, studies show.

Preventive strategies: Eating at least two servings a week of wild-caught, oily fish or a daily 1,000-to-2,000-milligram fish oil supplement with a 60-to-40 EPA to DHA ratio has been shown to be effective for symptoms of depression, bipolar disorder, attention deficit hyperactivity disorder and postpartum depression. Taking a brisk daily walk in nature with a friend or dog lowers four factors linked to depression: a “nature deficit”, physical inactivity, low vitamin-D levels and isolation.

Natural health writer Ronica O’Hara can be reached at This email address is being protected from spambots. You need JavaScript enabled to view it..

Read 1204 times
Tagged under
back to top