The Gut-Brain Connection
How Food Affects Our Mood
by Kimberly B. Whittle

WWe’ve all heard the phrase, “You are what you eat,” but the connection is more than just physical because food impacts our mood, too. During the last decade, there have been an increasing number of studies exploring what’s called the gut-brain axis and the role that microorganisms in the gut play in mental health conditions like anxiety, stress, depression and other disorders.

Depression is a leading cause of disability in the U.S. and worldwide. There are long-held views in medicine that depression is caused by imbalances in brain levels of serotonin—the neurotransmitter that plays a key role in regulating mood and other functions like digestion and sleep. These beliefs resulted in decades of extensive use of antidepressants, most of which boost serotonin in the brain.

However, research by University College London, published in July in the journal Molecular Psychology, found “no consistent evidence of there being an association between serotonin and depression, and no support for the hypothesis that depression is caused by lowered serotonin activity or concentrations.”

Michael Gershon, M.D., a Columbia University professor of pathology and cell biology, and author of The Second Brain, has explained to psychologists that “scientists were shocked to learn” that about 90 percent of serotonin is not created in the brain, but is actually produced in the gut and carried from there to the brain, not the other way around. This relationship is called the gut-brain axis.
A recent literature review of 26 studies suggests that imbalances in gut bacteria can disrupt the two-way communication along the gut-brain axis, leading to depression and other psychiatric issues.

Gut Health Equals Mental Health
“Gut health is extremely important for mental health,” says Bhavna Barmi, Ph.D., a senior clinical psychologist, relationship therapist and founder of the New Delhi-based Happiness Studio. “The traditional belief that only psychiatry and talk therapy can treat mental health has widened to include lifestyle and food, too.”

“The truth is that our food is the primary contributor of the quality and diversity of bacteria in the microbiome,” says Ishi Khosla, a clinical nutritionist and president of the Celiac Society of India. “There is an intricate relationship between the gut and the brain.” Food sensitivities, alcohol and highly processed, refined and sugary foods can lead to a lower diversity of good bacteria and increases in bad bacteria in the gut, which can trigger gut inflammation and unfavorable health conditions.

Most mood-related disorders start with inflammation of the brain as a response to inflammation in the gut. “Certain foods, like gluten, can cause an inflammatory response in the gut. Over time, sensitivities to gluten and other foods can lead to a 'leaky gut’, an impairment of the gut lining that lets toxins into the bloodstream. Often, if it remains unresolved, it leads to mood-related disorders and other chronic health conditions,” says Khosla.

Clinical nutritionists and other practitioners use biochemical markers and food sensitivity tests to help identify food ingredients that trigger inflammation in patients. However, if a leaky gut is present, a food sensitivity test may not be very accurate. As Tom O’Bryan, DC, chief health officer of KnoWEwell, explains in his bestselling book The Autoimmune Fix, “When you have a leaky gut, a practitioner may do a 90-food testing panel that comes back sensitive to 20 or 25 different foods. And then the patient exclaims, 'Oh my God, that’s everything I eat.’ Well, of course it is, because your immune system is doing what it is supposed to do—protecting you from toxins. Once the inflammation in the gut is reduced through the elimination of wheat and other offensive foods, and the implementation of a personalized diet and protocol to heal the gut [takes place], the same food testing panel will correctly identify those few ingredients to permanently avoid.”

Mood-Lifting Foods
Kelly Brogan, M.D., a holistic psychiatrist and author of The New York Times bestsellers A Mind of Your Own and Own Your Self, as well as co-editor of the landmark textbook Integrative Therapies for Depression, recommends making three dietary changes to lift mood:
• Eliminate processed foods and food toxins
• Add whole foods, good fats and therapeutic foods
• Add fermented foods

Eating foods that are fresh, whole, simple and organic when available fuels good gut bacteria and eliminates the toxins found in packaged foods such as hydrogenated vegetable oils, preservatives, dyes, emulsifiers, taste enhancers and sugars that can upset the proper balance in the gut. A powerful mood regulator is the omega-3 fatty acid found in such cold-water fish as salmon and trout or taken as a dietary supplement. These fatty acids regulate neurotransmission and gene expression, act as antioxidants and have potent anti-inflammatory properties. Good fats from pasture-raised meats, wild fish, eggs, nuts, seeds, olive oil, coconut oil and grass-fed ghee also contribute to mood regulation.

“Resetting the gut through good bacteria in probiotics and feeding the good bacteria with prebiotics is a powerful tool to fight mood disorders,” says Khosla. Fermented foods such as sauerkraut, pickles (truly fermented, not just cured in vinegar), kimchi and coconut kefir are natural sources of probiotics. They are delicious and easy to make at home.

A 2018 University of Toronto study in the World Journal of Psychiatry identified 12 nutrients to prevent and treat depressive disorders and found that the following foods had the highest levels of those beneficial nutrients: bivalves such as oysters and mussels; various sea foods such as octopus, crab and tuna; organ meats; leafy greens; lettuces; fresh herbs; peppers; and cruciferous vegetables such as cauliflower and broccoli.

Choosing what to eat is complex and affected by culture, cost, environment and taste preferences. Dietary changes can be difficult and take time, and those suffering from mood swings, depression or anxiety have additional challenges in making changes. Nutritionists advise starting small by incorporating one or two foods rich in beneficial nutrients and eliminating a highly processed or packaged food or two. Focus on incorporating a rainbow of red, yellow, orange and green foods into meals. “Food therapy to improve mood is inexpensive, free of side effects and can begin to show results within days,” says Khosla.

In view of the gut-brain axis, says Barmi, “It is imperative that from this point on, nutritionists, psychiatrists and psychotherapists work together for holistic care of the client to lead to maximum benefit.”

Kimberly B. Whittle is the CEO of KnoWEwell, the Regenerative Whole Health Hub online solution for health and well-being. Visit KnoWEwell.com.

Quinoa and Beetroot Salad with a Hint of Mint

Rinse quinoa and add to a pot. Add water and cook uncovered for around 15 minutes or until all the water is evaporated. Cover the pan and switch off the stove. Keep covered for 5 minutes, remove lid and fluff cooked quinoa with a fork. Set aside to cool. 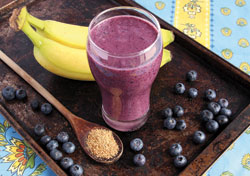 mariemilyphotos/AdobeStock.comBlueberries contain compounds that increase beneficial bacteria in the gut, as well as antioxidant properties that are remarkable at protecting our brain. In fact, consuming 1 cup of blueberries per day for three years gets our brain working as well as it did 11 years earlier. Bananas are high in pectin, which helps to normalize movements of the large intestine. Look for gelatin powders from pastured animals.

In a blender, combine the water, coconut milk, bananas, blueberries, flaxseeds, gelatin powder, fish oil, cinnamon and L-glutamine powder (if using). Blend until smooth. Add more water for a thinner smoothie, if desired. Serve immediately or pour into ice-pop molds and freeze for a sweet treat later on. 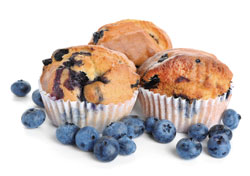 Preheat the oven to 350° F. In a large bowl, combine all the dry ingredients—almond flour, baking soda and salt—and whisk well. In a separate smaller bowl, combine the wet ingredients—eggs, honey and avocado oil—and blend until smooth.

Then pour the wet ingredients into the dry ingredients and mix until thoroughly combined. Fold in blueberries. Line cup muffin tin with paper liners and pour in batter. Bake for 15 to 20 minutes.

Read 760 times
Tagged under
back to top