For generations immemorial, men have been builders of culture, solid providers and inspired adventurers, but gender roles and sometimes-conflicting cultural expectations have taken a heavy toll on both the individual and community. The pervasive “tough guy” paradigm has denied half the human race its full emotional expression, resulting in amplified stress levels, compromised physical health, toxic aggression, broken families and a higher risk for addiction. According to research published in the American Journal of Men’s Health in 2020, death by suicide among men is almost four times higher than that of women and is partly attributed to the stigma of seeking treatment for depression. African American men carry the additional burden of racial and economic inequality, and their depressive symptoms are often more persistent and incapacitating.

Contrary to common myth, men are deeply emotional and responsive beings by nature. Centuries overdue, restrictive cultural definitions are slowly shifting to a broader psychosocial view of authentic manhood. Thanks to guy-friendly mental health resources, virtual and in-person support communities and diverse options in the alternative health field, more men are taking responsibility for their well-being and learning how to embody emotional freedom. They are stepping up to the plate as strong, sensitive leaders, something our world needs now more than ever.

Breaking the Chains and Choosing Authenticity
The masculine expectation and requirement have been for most boys to “buck up and tough it out” during childhood and adolescence, and this overt or sometimes very subtle conditioning can promote disproportionate power plays, homophobia and resistance to emotional intimacy well into adulthood. “Every society has 'feeling rules’ that govern how emotions can be expressed publicly,” says psychologist Michael Reichert, executive director of the Center for the Study of Boys’ and Girls’ Lives at the University of Pennsylvania and author of How to Raise a Boy: The Power of Connection to Build Good Men.

"Research tells us that boys are born as emotionally expressive as girls, but in a short time receive constant messages from their loved ones, schoolmates and TV shows that only certain emotions are okay for boys.” Such emotional restrictiveness has a profoundly negative impact on male development, he says.

For Todd Adams in Elmhurst, Illinois, cofounder of MenLiving.org and a Tony Robbins-certified life coach, recognizing societal trappings is key. “The first step is to have the awareness that we have been lied to for as long as we can remember about what it means to be a man. We have been conditioned to stay in the 'man box’, which means if we show any type of vulnerability, our value from the outside, as well as from the inside, plummets.”

Reichert concurs. “My belief is that tragic outcomes—addictions, violence, suicide and premature mortality—are a reflection of how men’s human natures are thwarted by cultural norms. Being confined to a man box is hazardous. We humans, including men, are built to express our hearts in close connections to others we love and who love us.”

The notion of going the distance solo is discouraged by Adams, whose organization helps men from all walks of life find support and connection through online meetings and adventure outings. “Once the awareness is there, I would invite family, partners, et cetera, to invite us to show up in a more authentic and human way,” he says. 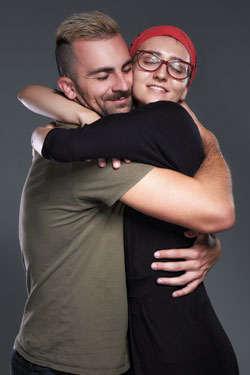 eodor LazarevAdobeStock.comStress and the Physiology of Feelings
For many men, emotions—other than “socially acceptable” anger and irritation—rarely see the light of day and instead morph into physical maladies such as digestive trouble, headaches, chest pain and high blood pressure. Unmanaged stress can also zap any zing in the bedroom. “I’m certainly not a doctor, but I’m sure there is a correlation for some about their emotional/mental/financial well-being being related to erectile dysfunction. The men that I work with often have a habit of not taking good care of themselves, and that lack of self-care ripples into other parts of their life, including their sexual life,” observes Adams. In spite of the fact that many others are struggling with the same condition, out of shame, it is often kept in the shadows. “My advice is that men find safe spaces to discuss these challenges with others. My hope is that men can discuss sexuality and intimacy as openly as women do.”

Josh Beharry, project coordinator of HeadsUpGuys.org, in Vancouver, Canada, an online resource hub for men battling depression, has spearheaded online stress assessment tests for more than 26,000 men over the age of 18 and found surprising consistency. “The results suggest that the two most common stressors faced by the men are a lack of meaning and feelings of loneliness, followed by financial strain, relationship difficulties and problems at work,” he says.

According to data gathered by Tulane University, human connection boosts immunity and wards off cardiovascular disease, anxiety, depression and cognitive impairment. For men especially, social bonds are critical in coping with life stresses. Forging new alliances and maintaining old ones can be challenging with or without a pandemic, but online communities offer additional support, camaraderie and nonjudgmental sharing, which can be especially helpful for those suffering from post-traumatic stress disorder (PTSD), addiction and depression.

Beyond Talk Therapy
Male depression can be hidden in plain sight, disguised as hitting the bottle to “relax”, or by working compulsively, engaging in high-risk behaviors or easily flying off the handle at loved ones. Beharry knows firsthand how insidious the disease can be and why seeking help sooner than later is vital. After miraculously surviving a horrific suicide attempt, he unexpectedly found hope and the will to live through walking, breathwork and human connection.

Being honest with others, as well as himself, was a turning point in his recovery. “For a lot of men, talking about dealing with depression feels like an admission of weakness or something to feel guilty about,” he says. “Try to think of emotional pain like physical pain. If you get cut, you bleed; that’s part of being human. Then you do something to treat the wound. Or if it’s deeper, you go to a doctor or a hospital. Denying painful emotions is like trying not to bleed when you get cut or trying to pretend you’re not bleeding.”

For family members or friends concerned about a man’s mental health, he advises, “Vague assertions like, 'You seem depressed,’ can make a guy feel attacked or put on the spot. Instead, it’s helpful to start by pointing out specific observations you’ve had about changes to his mood or behavior, such as, 'You seem stressed out,’ or, 'You haven’t been eating much,’ or, 'You’ve been isolating yourself from friends or turning down plans more than usual.’”
It is estimated that 4 percent of men suffer from the physical and psychological consequences of trauma, and PTSD is certainly not reserved for combat veterans. While traditional therapies like cognitive behavioral therapy and exposure therapy are excellent for treating depression, other modalities offer light at the end of the tunnel for men plagued by traumatic overwhelm.

Somatic Experiencing, developed by PTSD psychologist Peter Levine during the last 50 years, targets trauma stored in the nervous system and gently helps a person to increase their tolerance for difficult physical sensations and buried emotions. It is also highly useful in addiction recovery. Therapeutic massage, yoga and regular exercise are all allies for men to combat stress, anchor into their bodies and access unconscious feelings.
In the end, little things add up to a whole lot of change for a man. “You are not alone. Take your responsibility in how you experience life. Empower yourself with resources—podcasts, books, therapy, coaching—whatever support might look like for you,” advises Adams.

There is no better time than now for the masculine to rise to a new level of greatness. “There is ample evidence that we are in a paradigm-shifting moment in the history of manhood,” says Reichert. “When I speak with parents, I say that there has never been a better time in all of human history to raise a son.”

Marlaina Donato is an author and multimedia artist. Connect at WildflowerLady.com.

Read 237 times
Tagged under
back to top