On a blustery day, Julian Hoffman stood outdoors and watched wild bison grazing in the restored grassland of Midewin National Tallgrass Prairie, fewer than 50 miles from downtown Chicago. For him, it was a wild place, affording a glimpse of what North America looked like hundreds of years ago when bison roamed the continent by the millions. “We’re witnessing, in a way that’s both terrible and tragic, just what the profound cost is of continuing to destroy the natural world,” he writes.

Saving wild places is critical for human health and well-being, say both scientists and environmentalists. But defining what a wild place is or what the word wilderness means can be difficult, says Hoffman, author of Irreplaceable: The Fight to Save Our Wild Places. “If wilderness means a place untouched by humans, then none is left,” he says. Even the set-aside wildernesses where no one may have ever stepped have been altered through climate change, acid rain and other human interventions.

Humans are also losing the wilderness that is defined as land set aside solely for plants and creatures other than humans. Prominent naturalist David Attenborough, whose most recent documentary is A Life on Our Planet, says that in 1937, when he was a boy, about 66 percent of the world’s wilderness areas remained. By 2020, it was down to 35 percent.

murray/AdobeStock.comA wild place can be as spectacular as Yellowstone, a 3,500-square-mile national park in Wyoming, Idaho, and Montana, filled with hot springs, canyons, wolves, and elk. It can also be as simple as a sky filled with a murmuration, or gathering, of thousands of swooping starlings, which once caused two teens to stop taking selfies and photograph the natural scene above them instead, as Hoffman witnessed in Great Britain.

Such regions that offer vast tracts of natural beauty and biodiversity are even found in and around major cities like Chicago, says Chicagoland nature blogger Andrew Morkes. “A wild place is also where you don’t see too many people, or any people, and you can explore,” he says. “You can walk up a hill and wonder what’s around the next bend.”

“A wild place could be a 15-minute drive from home where we can walk among plants in a meadow, or a tree-lined street, or front and back yard, if landscaped with wild creatures in mind,” says Douglas Tallamy, author of Nature’s Best Hope: A New Approach to Conservation that Starts with Your Yard.

Sustaining Our Species
“We need these places to save ourselves,” says Tallamy, who heads the Department of Entomology and Wildlife Ecology at the University of Delaware. “Humans are totally dependent on the production of oxygen and clean water, and that happens with the continued existance of flowering plants, which are dependent on the continued existence of all the pollinators. When you lose the pollinators, you lose 90 percent of the flowering plants on the Earth. That is not an option if we want to stay alive and healthy.”

Our mental and emotional health is also at stake. According to a recent overview in the journal Environmental Health Perspectives, studies have shown that natural settings can lower blood pressure, reduce depression and anxiety, and help the immune system function better.

People have saved wild places over time, of course. “The world’s ancient redwoods are still with us today because people in the early 1900s fought to protect and preserve what they could already see was rapidly diminishing,” Hoffman says. “In the year 2022, we are the beneficiaries of those past actions. Yet less than 5 percent of those old-growth redwood groves are left, and we live in an age where we’re losing an extraordinary range of wild species; for example, 3 billion birds have disappeared from the skies of North America in just the past 50 years. That’s why people need to continue to fight for wild spaces.”

Community Crusaders
In researching his book, Hoffman went looking for wild-space struggles. In Glasgow, Scotland, he met people that fought to save an urban meadow from being turned into a luxury home development. “I’d never experienced as much joy in any one place as when I spent time with the community fighting to preserve this tiny meadow,” he recalls. “They campaigned and lobbied politicians, and eventually, the government backed down. And now the whole community is able to enjoy this site where a lot of urban wildlife thrives.”

Once-wild places may also need human help to again become wild refuges. The Midewin National Tallgrass Prairie, where Hoffman saw the buffalo, “was once an arsenal for the production of extraordinary quantities of ordnance for a number of wars,” he says. After hundreds of die-hard volunteers dug out invasive plants, scattered seed and documented wildlife on the 18,000-acre prairie, visitors can now walk among big bluestem and golden alexander, and listen for the sweet song of meadowlarks in the grasslands and chorus frogs in the wetlands.

Conservation volunteers working to save wild places hail from every state. In fact, nearly 300,000 volunteers contribute more than 6.5 million hours of volunteer service a year to the U.S. National Park Service, from leading tours to studying wildlife and hosting campgrounds. 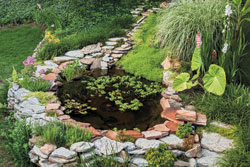 urobanks/AdobeStock.comSadly, roughly 100 million people, including 28 million children, do not have access to a quality park within 10 minutes of home, according to The Trust for Public Land. Projects, such as the Outdoor Recreation Legacy Partnership Program, which enables urban communities to create outdoor spaces, can help. The U.S. Department of the Interior committed $150 million to the program in 2021. “Every child in America deserves to have a safe and nearby place to experience the great outdoors,” says Interior Secretary Deb Haaland.

A Homegrown National Park
Tallamy says one of the most important ways to get people to appreciate and save wild places is to begin in their own yards. “We have wilderness designations. We have national forests. We have national parks. We have 12 percent of the U.S. protected from development,” he says. “Yet, we are in the sixth great extinction. Our parks and our preserves are not enough. My point is that we have got to focus on the areas outside of parks and preserves.” He urges what he calls a “homegrown national park,” in which homeowners, land managers and farmers create a habitat by replacing invasive plants with native species.

Tallamy speaks from experience. He lives on a 10-acre former farm in Oxford, Pennsylvania. “It had been mowed for hay and when we moved in, very little life was here,” he says. “We have been rebuilding the eastern deciduous forest here, getting invasive plants under control and replanting with species that ought to be here.” He’s now counted more than 1,400 different species of moths on his property and documented 60 species of birds nesting within the landscape. “We have foxes who raise their kits in the front yard,” he says.

Lots of acreage is not required, he says. In Kirkwood, Missouri, homeowners created a wild place on six-tenths of an acre on which they’ve documented 149 species of birds. “If one person does it, it’s not going to work,” he stresses. “The point is to get those acres connected. When everybody adopts this as a general landscape culture, it’s going to help tremendously. By rewilding your yard, you are filling in spaces between the true wild places and natural areas. The reason our wild spaces are not working in terms of conservation is because they are too small and too isolated. Even the biggest national parks are too small or too isolated.”

Tallamy says people can create wild spaces in their yards by reducing the amount of lawn they have or even getting rid of it. They can grow native plants and discontinue the use of pesticides and herbicides, which are disrupting ecological function of wild places the world over, as research shows. Hoffman agrees, “We’ve cultivated a culture of tidiness. It’s actually very easy to welcome wildlife into your home places, often by doing fewer things, by not bringing the leaf blower out and by leaving some dead wood where it fell, which creates important shelters for insects, for example.

“Such wild yard spaces encourage wonder. Suddenly, the kids are out there and they can be absolutely fascinated by a small glittering beetle. For me, to experience the wild is to go to the shore of a lake, to be present in the mystery, to be among the lake’s reed beds, to see a marsh harrier sleek out of those reeds and to know you’re part of something much larger,” he says. “There’s so much joy and beauty and complexity in being in the presence of other lives besides human.” That in itself is reason enough to save wild places.

Sheryl DeVore has written six books on science, health and nature, as well as health and environmental stories for national and regional publications. Read more at SherylDeVore.wordpress.com.

+ - Creating a Wild Space at Home Click to collapse

Creating a Wild Space at Home 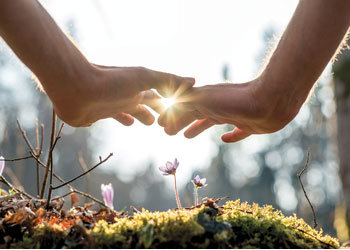 ajus/AdobeStock.comIn their book The Living Landscape: Designing for Beauty and Biodiversity in the Home Garden, University of Delaware ecology professor Douglas Tallamy and landscape designer Rick Darke show how to create wild spaces in yards, including what and where to plant and how to manage the land.

They advise homeowners to:
• Stop using pesticides and herbicides.
• Replace non-native plants with those native to the region.
•  Reduce lawn space, converting it to native plants.
• Leave leaf litter, withering plants and dying trees alone to provide shelter and food for wildlife.
•  Create a small pond or another water feature.

“Mourning cloak butterflies overwinter as mature adults. If you say, 'Hey, let’s just clean up all of that so-called leaf litter,’ you could be cleaning up the habitat of mourning cloaks and killing them,” says Darke, who has served as a horticultural consultant for botanic gardens and other public landscapes in Texas, Maryland, New York, Illinois and Delaware. “That’s not litter. It’s meaningful habitat.

“A dead tree in your home landscape, called a snag, often contributes as much to the local ecology as a living tree,” he adds. “For example, woodpeckers build nests in holes or cavities in a snag, and countless insects find shelter and nourishment in the organic material of the snag.”

Read 433 times
Tagged under
back to top